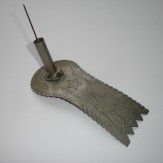 The people of the southern plains acquired their metalworking technique from contact with Spanish and Anglo craftsmen. The pieces grew into an important aspect of identity for the Southern Cheyenne, Arapaho, Kiowa, Comanche and others in the southern plains. From long, flowing hair drops to belts, pectoral ornaments and horse regalia, the Comanche, Kiowa, Arapaho, Southern Cheyenne and others used the nickel, or “German” silver to project status and wealth. Join us for a reception showcasing examples of this work, Thursday, July 19th from 5 – 8pm.  The show will run through mid August.